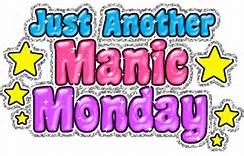 It was an overcast day with a mild temperature in the high 60's.

What should I do today? No square dancing for awhile.

In the morning I did my daily challenges and the Solitaire Event: Medium Mayhem of 27 games.

For the last couple of years I have been planting wildflowers in the backyard planter that goes around an oak tree. It's not cold or hot outside because of the overcast, perfect let's get started. I looked at the planter and saw that it was full of grass, weeds and leaves. Larry had gotten on the internet and found out that some of the flowers I planted last year might come up again this year. I looked at the growth and thought most of it was grass and weeds. I got a bucket, gloves and tools (a trowel, a cultivator and trans-planter). I used the cultivator to dig up the dirt. I started pulling the grass and weeds by hand. Then I put on the gloves but they didn't last long because it was easier without them. The ground was soft because of the rain yesterday. I filled the bucket up two and a half times, it took 45 minutes. Now I'm ready to plant flowers.

I have a little bit of flower seeds from last year but I don't have enough. Larry got on the internet and ordered a pack for me. It's amazing how many different types of flower seeds there are. Where our planter is located it doesn't always get sunlight so Larry decided to order the flower seeds that will grow in partial shade. The flower seeds won't be here until Thursday. Larry asked about the flowers that Alexa had given us as a gift. I had totally forgotten about them. The package said that it has enough flower seeds for 5 square feet. The flowers will grow either outside or indoors. I told Larry I would plant the flowers Friday when we have all the seeds. I also told him that I need some more potting soil for the planter.

Larry spent part of the day researching cloud based backup products. He also received our new septic timer. This morning he set the timer up. He said it was very easy and the instruction booklet helped. Now he's going to make sure it continues to work. He going to keep an eye on it for a few days. He set the timer to turn on at 7:00 am and since he's up at that time he can see if it turns on via the indicator light.

In the evening we watched the third episode of Star Wars called Revenge of the Seth. Then we watched a few videos about PCloud, which is a backup program on the cloud. Then I watched a few more episodes of Murdock Mysteries. I also did 20,000 steps.
Posted by Ruth's Life is Good at 7:11 AM