Larry continued working on the generator. Yesterday he was having problems fixing a stud that holds the exhaust to the engine but this morning he was able to fix it. He still needs to buy some screws to replace the screws that were rusted out and broke off. While Larry was working on the generator I did my daily challenges and the Event: Pyramid Mini of five games. It took me 18 minutes and 28 seconds, which put me in 36th in my group.

It was a beautiful day so after lunch we decided to go to the lake. We were there for an hour and a half. When we first got there I really didn't want to do anything but float. Over the past 10 days the water temperature had gone from 78 to 74. The temperature dropped due to the rain and the temperature only being in the high 70's. Larry got in slowly. After he got out he decided to wake surf. He got up the first time. When he finished I did a set, it took me four tries to get up but once I was up I did great. While floating we saw a few kids jumping off a rock ledge into the lake and having a great time. We also saw a few people fishing off the banks and in boats. We had a great time on the lake. I put a short video down below, click on it and it should play.


In the morning I was going to mow but the yards were still damp from yesterdays rain. After we got back from the lake I mowed the frontyard and the entire backyard. Last week I didn't mow the far back so it needed to be done, the grass was getting tall. I was only going to mow the far back of the backyard but I decided to do the whole yard. It took me two hours. By the time I was finished I was tried and it was dinnertime.

While I was mowing a street vendor showed up at our neighbor's house and set up a truck. The vendor was called Treno, they make pizza pies for $11.00 dollars a piece. I was tried and didn't want to cook for dinner so this was a perfect opportunity to try something new. I walked over and bought a pepperoni pizza. It was small but I thought it tasted good. The vendor was wearing a mask and I so was I.

During the day I worked on my puzzle. We watched our YouTube videos. After dinner we  watched a few episodes of Prisoners' Wives. Then I started watching the third season of DCI Banks. I did 24,000 steps. We had an awesome day. LIFE IS GOOD!!!! 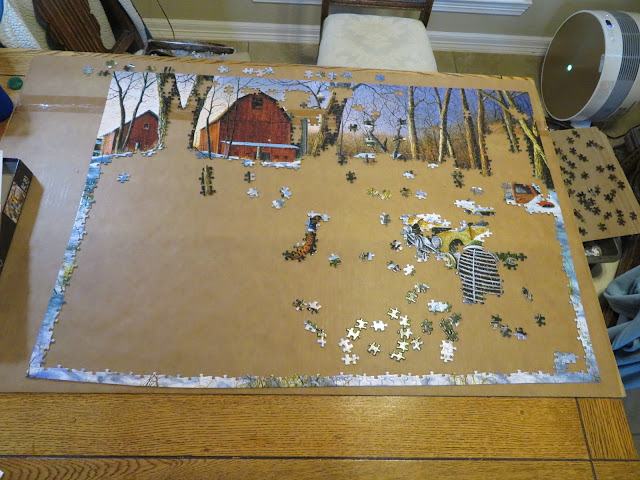 How far I've gotten with my puzzle