Larry has a couple of things he wants to do so he ordered some things from Amazon, they arrived today. He also needed a few items from The Home Depot, he ordered them online. We're glad they offer curb service. We received an e-mail saying the order was ready so off to The Home Depot we went. Once there we called to let them know we were there and they brought the items to the car.

If you want to go inside The Home Depot you get in line and as people exit the store they let people in. The have erected a bunch of canopies so if people have to wait at least they have shade. As we were waiting for our items we noticed that there weren't a lot of people wearing masks. Larry continues to wear a mask whenever he might be in close proximity to someone.

I spent 3 hours, 9 minutes and 21 seconds to complete The Event: Two Game Tango, 10 games of Klondike and 10 games of Spider. This put me in 20th place. I also did my daily challenges. During the month of May Microsoft Solitaire Daily Challenges give you extra bonus points to celebrate their 30th Anniversary.
Last week I came in second place in my 150K steps challenge. Today I did 25,000 steps. 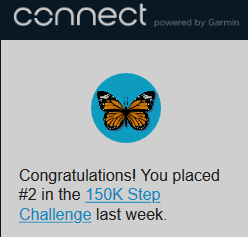 After dinner I went outside and watered my flowers. As I was watering them I was pleasantly surprised to see two of the partial shaded plants had a bud. It has been six weeks since I planted the flower seeds.

In the evening we continued watching Eureka. I watched a few episodes of Chuck.
Posted by Ruth's Life is Good at 6:59 AM