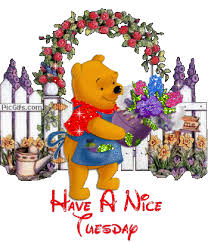 We woke up to 32 degrees and a light wind. We hung around the house for an hour or so and then went for a walk on the Pepper Creek Trail. We walked for an hour. It was a very pleasant walk with the birds chirping. Pepper Creek Trail also has a brand new bicycle fix it station. At the beginning we did not see anyone but half way through the walk people started to show up. At times the creek flows over a dam near a statue of two children playing. Today was one of the days it was flowing a little. As we walked we saw cardinals, blue jays, hawks, wood peckers and other birds enjoying the cool weather.

Before we left on our trip Larry installed a new fresh water pump in the Minnie. At first it was very quiet and worked perfectly but towards the end of the trip it started to sound funny. Larry thought it sounded like it was getting air into the lines. The pump is a real pain to get at, it is buried under the floor in the closet, to get to it you have to empty the closet and then remove the floor of the closet. While we were in The Valley, Larry emptied the closet and found that a water connector going to the pump was a bit loose, he tightened it up and it fixed the problem for a bit. In The Valley we are normally hooked up to city water so we don't use the pump but when the temperature is at freezing we unhook from the city water and use the pump. The pump started sounding funny again so yesterday Larry took everything apart to find the problem. He believed it was the same connector he worked on before and he didn't have a new one. We bought a couple of pieces at Home Depot and after lunch Larry rerouted the line and replaced the connector with a new one, the pump once again is quiet. The floor cover that goes over the pump has never fit correctly so while he had it off he used his new saw and trimmed a little piece off it, now it fits great. The cover is held down by screws and a couple of the holes were stripped out. While he had the cover off he drilled new holes.

While Larry did the Minnie project I worked on my jigsaw puzzle and helped him when he needed me.

It was a beautiful day. When it was time for dinner I got the charcoal grill out and barbecued hamburgers for dinner.


After dinner we watched an episode of the GizWiz and YouTube videos. Then we watched the 1990 movie, Quigley, starring Tom Selleck, Alan Rickman and Laura San Giacomo. It is a cute Australian- American western. I liked it even though I have seen it before. We had a terrific Tuesday.