4-7 Getting Ready for a Trip 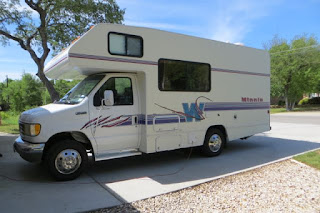 What a beautiful Thursday we had. We woke up this morning to clear skies and sunshine with a little breeze. This weekend we're going on a square dancing trip to Tool, Texas so we had to go get the Minnie out of storage. We loaded Flo into the car and stopped at HEB to pick up a few things for our trip. Then we picked up the Minnie. Larry told me that he was going to stop and get gas before going to the house. When I got home I took the groceries into the house and put them away. When Larry got home we had lunch. The Minnie was due for an oil change so after lunch Larry changed the oil. I helped when he needed it. One of the windshield wipers was falling apart so he replaced both of them.


After the oil was changed I washed the rugs in the house. I wanted to try out the new washer on washing heavier loads. In the past there have been times where heavy loads like rugs would get out of balance and I would have to rush to turn off the washer and move things around. So far this washer has not had that problem, I am not sure if it is because it does not have an agitator or something else in the design. I'm still having problems getting to know what cycle to use on the dryer. When I tried to dry whites, jeans and the rugs they end up being damp at the end of the time. I think maybe it's because I have it set on the Eco mode. Next time I'll try turning off the Eco mode. But both the washer and dryer work great.

While I was doing laundry the power went off for a few minutes. I reset the clocks and Larry found out that we had lost our internet connection. He rebooted the computers and still didn't have an internet connection. So he checked the router and discovered it was acting up. He got one computer working so he did some research on routers. He found a few routers he could use. So we loaded Flo into the car and back to town we went. The first stop was Walmart, he found one he thought would work but he hadn't done any research on it so we didn't buy it. The second stop was Best Buy, we found a router there and bought it. Once at home Larry installed the new router and now we're in business again with an internet connection.

After dinner I loaded up the Minnie with items we need for our trip. Afterwards we finished watching the last two episodes of Newsroom. I liked how they finished the series out. We had a busy day.
Posted by Ruth's Life is Good at 7:54 AM