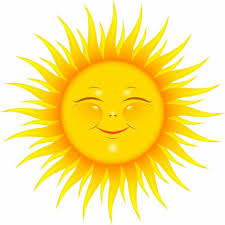 We had a beautiful day with sunshine, the temperature got to 95 degrees.

Since Memorial Day weekend the street that runs in front of our house has been busy. A lot of the traffic goes to the boat ramp about two blocks away. Lake Belton is 9 feet over full but most of the boat ramps are open. When we went to town we crossed over the dam, we saw quite a few wakeboard boats and many jet skies on the lake. People were having fun.

When the temperatures got in the mid 90s and above we noticed that the bird and squirrel activity on the porch slowed down. Another reason might  be because our neighbor's home construction has had more activity. Jason has had the electricians working on the power, a couple doing the taping and floating and a crew working on the pool.

This morning we had some activity. A couple of squirrels showed up on the porch and another one under the oak tree. A hummingbird and woodpecker made an appearance. The heat doesn't seem to affect the doves. We had two families of deer show up, one was a doe and a fawn and the other one was a doe and two fawns. They went under the oak tree and ate a little bit until they heard the crew next door and they ran to the trees. It still amazes me how fast the small fawn can run, it looks like they're faster than their moms. This was a great way to start the day. Through out the day we watched the wildlife come and go. 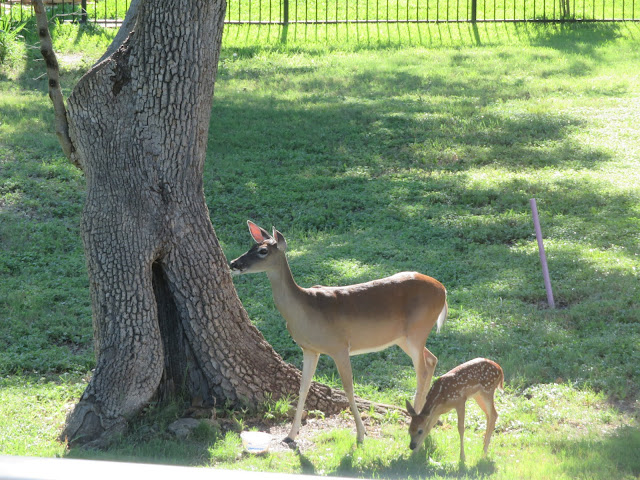 A doe and fawn having breakfast 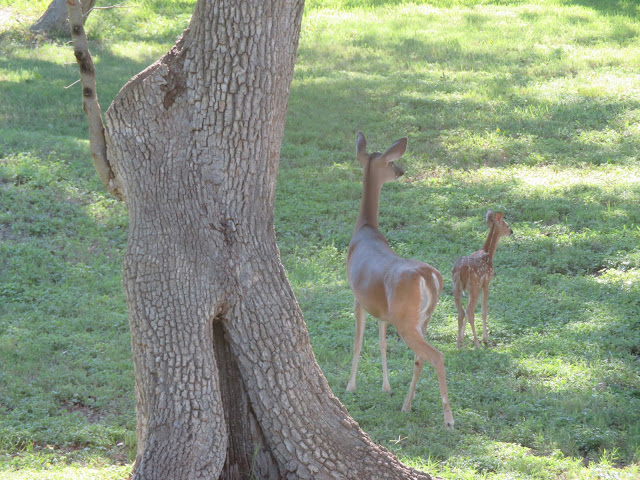 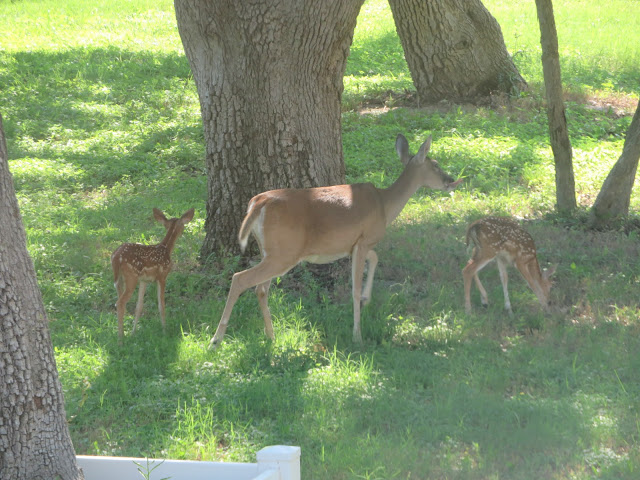 Mom and her two fawns 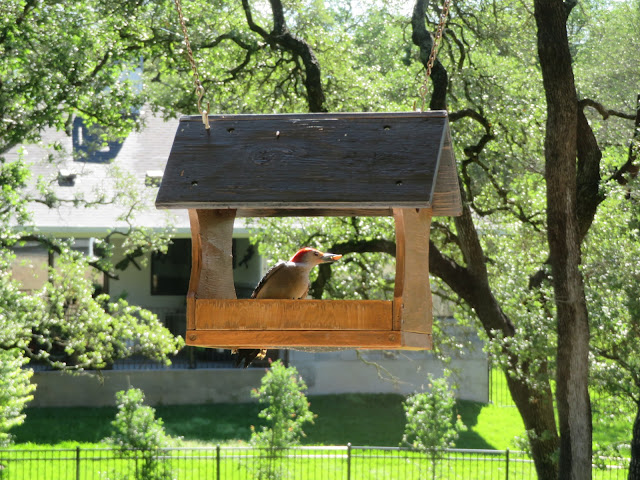 A woodpecker getting a morning snack 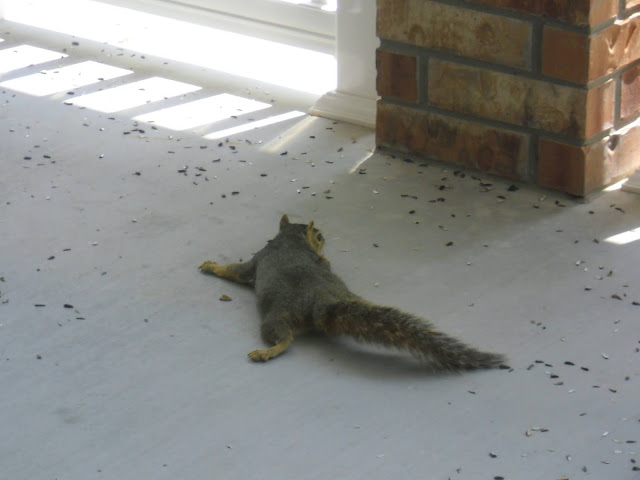 During the last week the fox has made its appearance but it usually early evening or late night. A couple days ago I saw a opossum show up around 10:30 pm. Some nights I see a herd of six deer show up but most of the night I see one or two deer at a time. I don't think I will ever get tried of watching the birds, deer and squirrels. Even though I have to clean up after them. 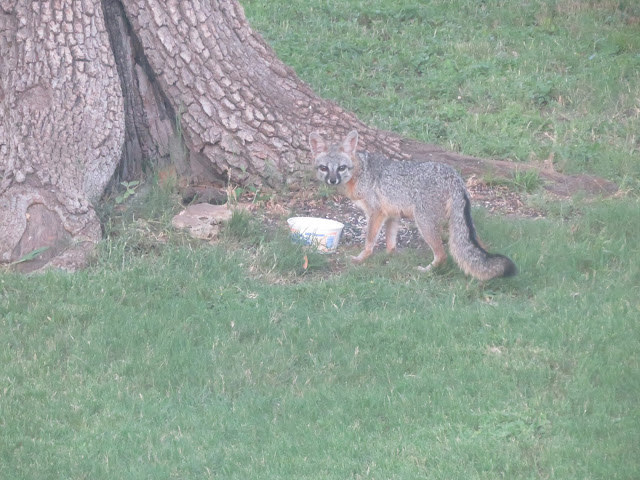 Having dinner a couple of nights ago

We spent most of the day working on installing a automated roller blind in the living room. The living room window is seven feet wide so that presented a few challenges. Originally Larry was going to remove the mini blind and only have the automated blind but he decided he would be able to keep both. When we dance via Zoom if we don't close the blind the light coming in through the window makes it very difficult for people to see us. With the mini blind down I can peek out through the slats and check on what is happening with the wildlife on the back porch. By keeping both blinds we can use the mini blind when we dance and the automated blinds the rest of the time.

First Larry removed the mini blind. Next he worked on modifying the rod that came with the blind for the motor. The rod was rattling because of the spring in the rod and he could not get the spring out. He didn't like this so we went to The Home Depot to get a pole like we used on the first blind. When we got home Larry modified the new pole for the motor. We moved the blind into the garage where we cut the width and length where we needed them. After cutting the blind we had to roll it onto the pole. Then Larry hung the blind and got it to work with the remote control. It works great. Then he programmed our Alexa device to open and close the blind. Final step was to rehang the mini blind. Now if I ask Alexa to open or close the blinds both the living room and dining room blinds will open/close, or I can ask her to open either blind individually. Too cool. 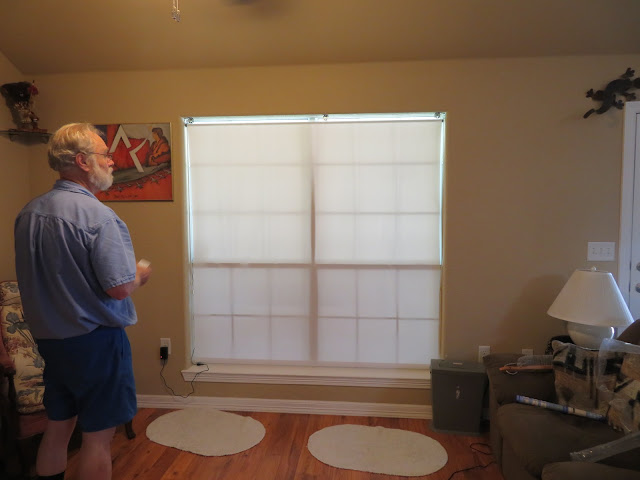 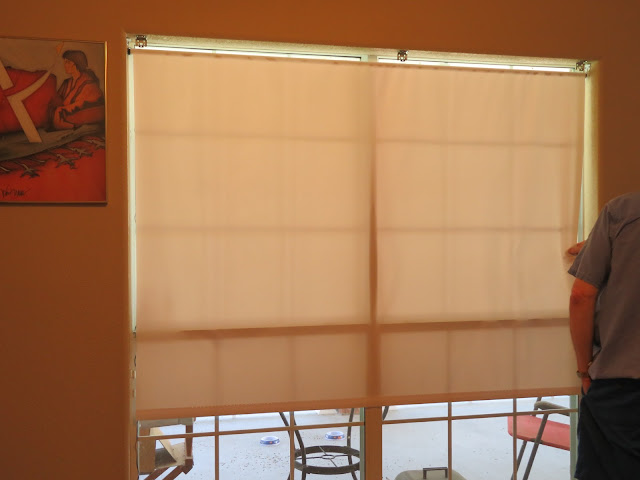 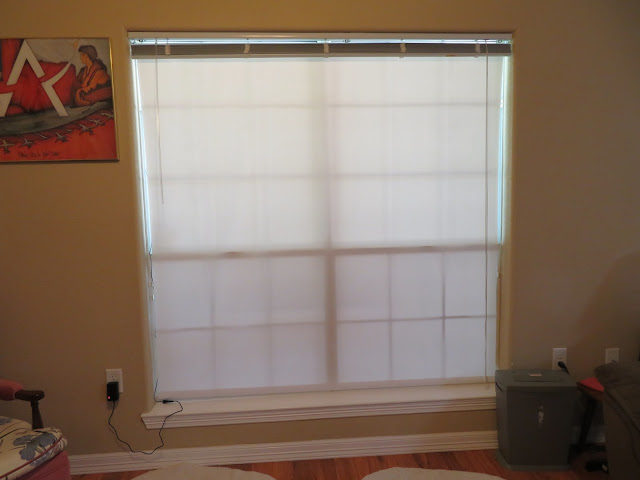 Completely down with the mini blind up 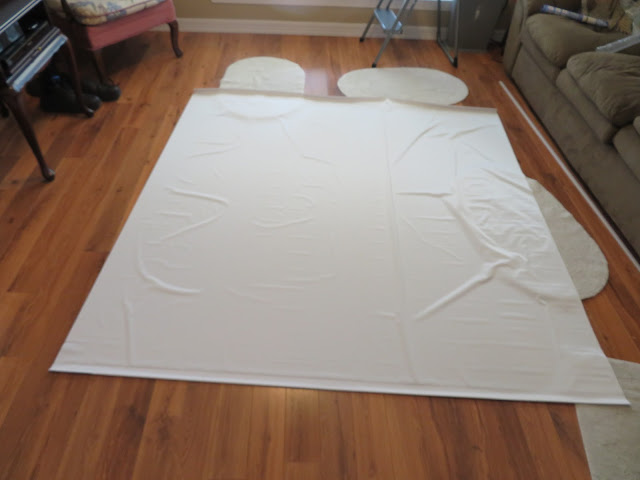 Material removed from the blind

After finishing the blind project we went back to town to pick up a package at The UPS Store. It was another Seeds Program item. While there Larry got the rest of our mail.

I did the Daily Challenges and the Event: Spider Mini of 6 games. It took me 59 minutes and 02 seconds, which put me in 14th place in my group.

In the evening we attended Don Moger's Saturday Night Fever dance at 6:00. This week he invited Jeremy Butler to call with him. Don and Jeremy called two A2 tips a piece, one C1 tip and the third C1 tip together. We had 46 participants for A2 and 36  participants for C1. We had another fun Saturday evening dancing to Don and Jeremy and with friends.

After the dance we watched a dirt stock car race at Knoxville Raceway. When we were young and lived in Arizona we went to lots of car races. There were multiple tracks in the Tucson/Phoenix area. There is no car racing near where we live now. A few years ago while we were coming back from a trip we did go to a dirt track sprint car race outside of Dallas. The track allowed us to camp on some land they had across the road. We met a wonderful group of people there, they invited us over for a wiener roast and we even attended the race with them. We had a terrific time. Tonight's race was second race of Camping World series. The race was 50 laps.

Then we started to watch the third season of The Indian Doctor. Then I started watching the season of Keeping Faith. I ended up doing 26,000 steps, which put me in 3rd place.