A weather front came in last night bringing wind and some rain, the rain went away mid afternoon but the wind persisted.

I made pancakes for breakfast and then I did the Daily Challenges and the Event: Two Game Tango of 20 games (10 Klondike and 10 Spider). It took me 2 hours, 51 minutes and 11 seconds, which put me in 21st place in my group.

I started a book on my Kindle, Resurrection Row by Anne Perry. It's a historic detective serious featuring Charlotte and Thomas Pitt. I've already read three books from the series and liked them. So far I like this story. Larry finished a book and started another one.

After lunch we were reading and we had a knock on the door. Park rangers were going door to door letting the campers know we were under a tornado watch, currently there are only four campers in the park. If severe weather comes we should take shelter in the bathroom. Larry checked the weather and saw there was rain coming. We did get the rain about a half hour later. It came down hard and there was a little hail with it. It lasted about a half hour.

Last night Larry found photos of our last visit here at Mount Nebo State Park. We were here in 2010 at the same time as we are now. As he was looking at the photos he noticed we had stopped at the same places and took pictures of many of the same things. We hiked the Rim Trail 11 years and two days ago. Some things we took pictures of then we didn't see this trip. So when it stopped raining for a bit we decided to hike to a couple of the places and see if those sites were still there.

Eleven years ago we had taken a picture of a sign built into a fence by the Young Adult Conservation Corp in 1979. This organization started in 1957 when the Student Conservation Association placed its first college students in the national parks and forests. It was modeled after the CCC. The students are provided with year-round conservation-related employment and educational opportunities. We found the sign again today.

From there we walked the rim trail to the visitor center. We stopped at Cave Spring and found a carving in the rock by the CCC. We had hiked this same trail the other day and missed the carving, not sure why we saw it 11 years ago and missed it this year.

We continued our adventure past the visitor center to Sunset Point. We didn't find anything else. We walked around Sunset Point and took the road back to the campground. As we walked we saw beautiful homes and cabins. Some the the homes had cute statues in front of them. We ended up walking about 2 miles. We didn't want to go too far because there still was rain in the area. 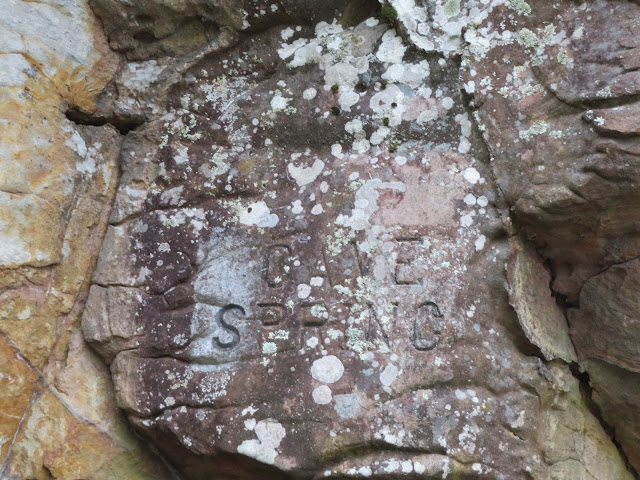 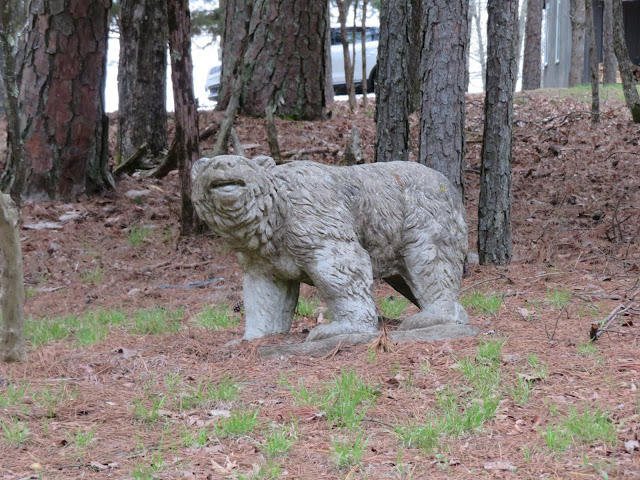 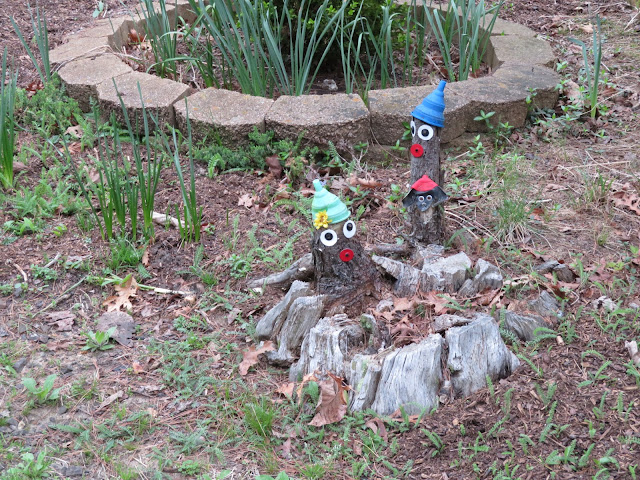 A family of gnomes 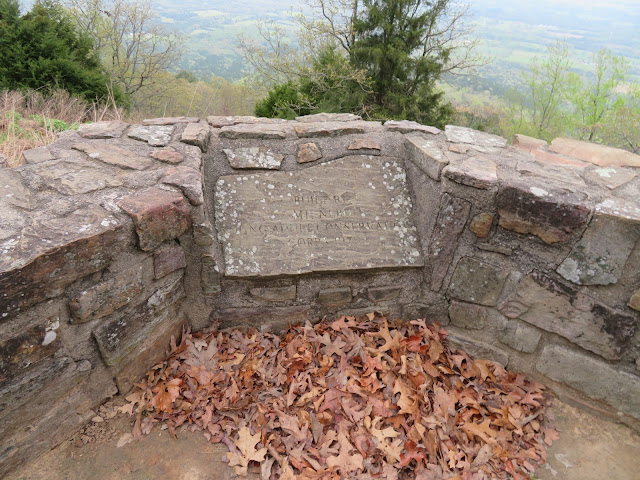 After dinner we walked around the neighborhood. We decided to walk the road because the 3 C's Trail would be too muddy. We walked to Sunrise Point and looked at the cabins and homes in the neighborhood. We saw a few deer. We wore our jackets because it was a little nippy. We saw a drainage pipe that went over some rocks and it looked like a waterfall. It was right by the parking lot to the Seasonal Waterfall so we stopped there. Larry sat at a table and waited for me because I decided to go look at the Seasonal Waterfall. I didn't have my hiking pole and wished I did because the short hike was very strenuous. The Seasonal Waterfall was flowing a lot more than yesterday. After taking a few pictures I hiked back. Then we continued on our walk. We walked by the Fire Department, it had a cute sign on the building. We saw the Superintendent cabin and other cabins. It was a very nice walk. We walked for about an hour. 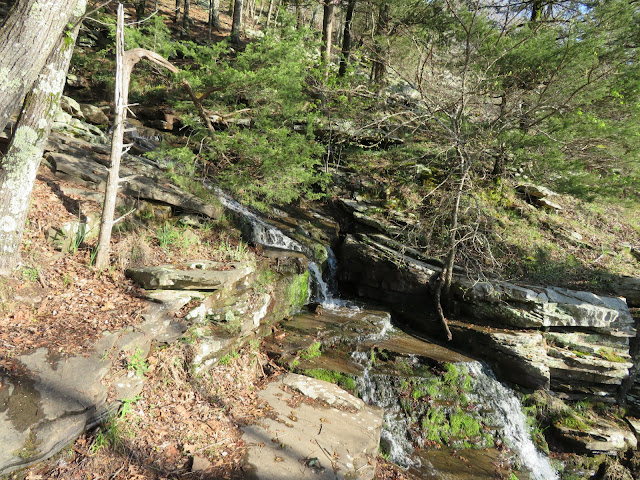 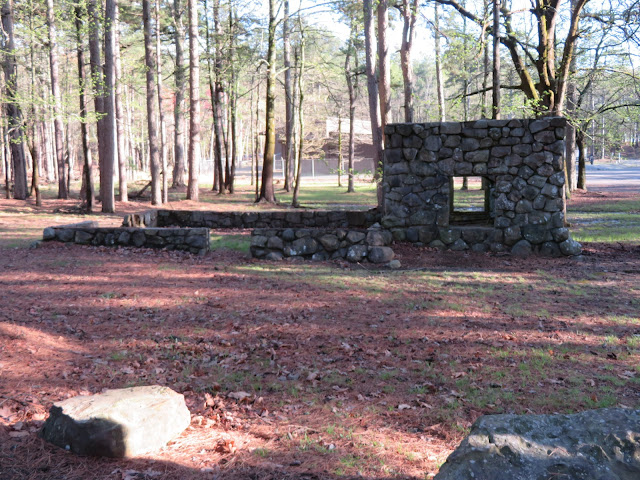 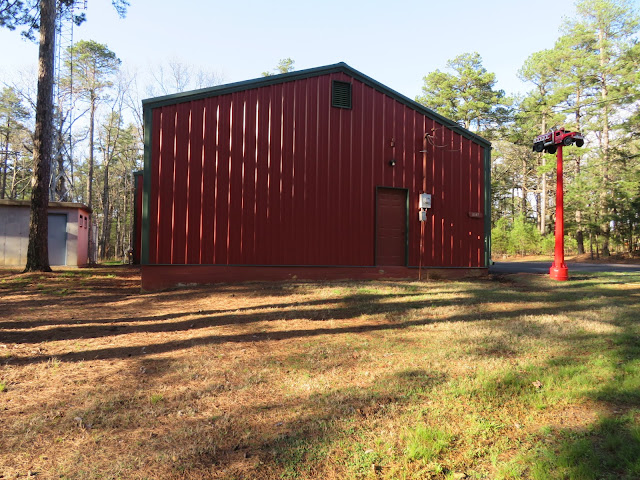 After dropping Larry off at the Minnie I did another hour walk around the neighborhood. I ended up walking three miles. I saw a lot of deer. I said hi to people who were walking. I talked to the guy who had a skeleton on his upstair porch. He said he had one in both of his vehicles. It was a pleasant walk. When I got home I finished doing my steps. I wasn't sure how many steps I would do because of the rain. I ended up doing 26,000 which put me in 5th place in my group. 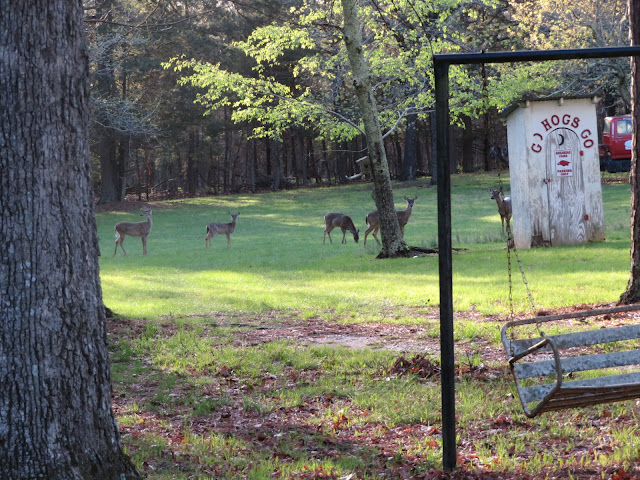 Deer I saw during my walk 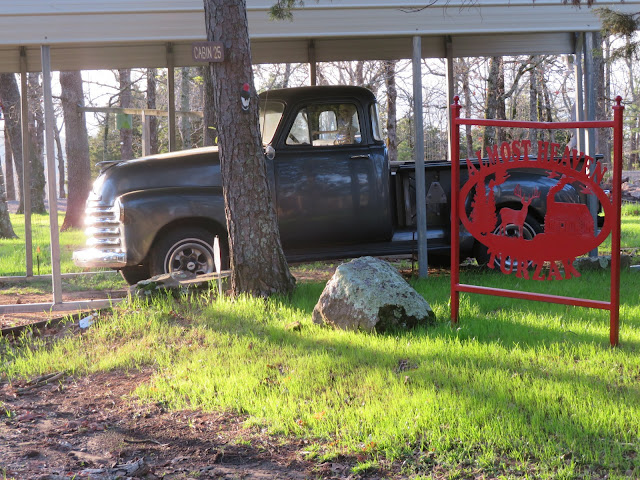 Skeleton in a truck