9-24 Aspencade Plus Square And Round Dance 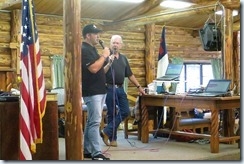 Early this morning (6:00 a.m.) we got a knock on our door. Larry crawled out of bed to check it out. It was security from Buffalo Thunder Casino, he told us that there was some RV parking in the north parking lot for overnight. They let us stay the night last night but if we were going to stay we would have to move. He didn’t stress that we had to do it right away. Larry told him that we were going to leave in a little while. We left about 8:00 and drove around to the parking lot where the security guard told us about. We hadn’t seen any signs last night and even this morning it was hard to find the sign. It was in the back of the lot that had another sign that said no overnight parking that’s why we didn’t see it. So next time we’ll know.

Red River was about 90 miles from Buffalo Thunder Casino so we got there early. The drive was through a magnificent mountain range. The last time we went through the mountain range we saw big horns but this morning it was later so we didn’t. I slept most of way to Red River. Before checking into the Red River RV Park we drove around Red River. It’s a small ski town with shops, restaurants and a few other businesses. The Aspencade Plus Square and Round Dance Festival wasn’t the only thing going on in Red River, it was having a Folk Festival. After driving through town we checked in. While Larry was checking in our friends Sharon and Mike from Colorado came by to say hi. They were happy that we made it. When we were driving around Larry saw that James McMurtry was going to be at the festival so after we checked in he got on the web and checked it out. He found out that James was playing at a bar and it was way too much money. 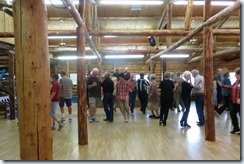 Plus dancing to Hunter and Jerry calling 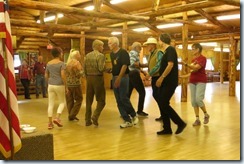 Sharon and Mike in the black doing the Advance tip

After having lunch Larry and I met up with Sharon and Mike and they drove us to the square dance. For the next three days while we’re in Red River there will be a Plus workshop for an hour and a half and an hour workshop for Advance dancers every afternoon. In the evening there will be a dance with rounds in between each tip. This afternoon we didn’t have a workshop instead we had a dance. Hunter Keller and Jerry Galbraith decided since there were only enough people for a square for Advance they would have the Plus dance for two hours and a half hour for Advance with a tip at the end of the dance tonight. This was the first time we ever danced to Hunter and Jerry so we had a great time. There were enough people for five squares. Everyone was dressed casually. After the dance we all went home and took a nap.

In the evening we went back to the hall and danced for a couple of hours and most of the dancers were dressed up. There were six squares and a lot of round dancers. Bill and Mary Kaye were there so they came over and said hi to us. We only danced with them one tip but hopefully will dance with them more tomorrow.
Posted by Ruth's Life is Good at 9:59 AM