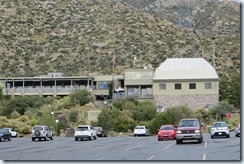 Sandia Peak Tramway in Albuquerque
We woke up this morning and it was raining. Larry had another really rough night and I convinced him to head back home.  When we got to Clines Corner we stopped for lunch. Larry said he was feeling a little better and he really did not want to go home so after lunch we headed towards Albuquerque. When we got to Albuquerque we stopped at Sandia Peak Tramway. Sandia Peak is where people in the area go snow skiing when they get enough snow. We didn’t ride the tram but we watched it go up to the top of the peak. While there we walked through the New Mexico Ski Museum. It was a very small museum with exhibits about the history of snow skiing in New Mexico. Next we stopped at the Bien Mur Indian Market Center, a beautiful building with a lot of Indian jewelry, pottery, paintings, dolls and other crafts for sale. We didn’t buy anything but it was still nice to walk around and window shop. We were actually going to do these things last spring but we ended up leaving Albuquerque a bit earlier than planned, had to go home and take Louise car shopping. 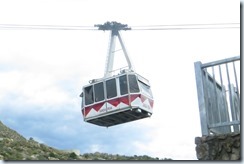 The tram leaving the depot 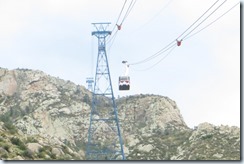 The tram going up to the top of Sandia Peak 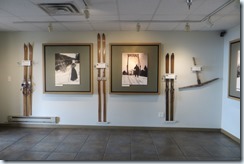 One of the exhibits at the museum 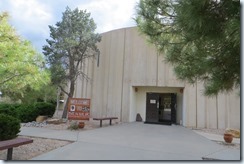 Just outside of Albuquerque is the Sandia Resort and Casino, Larry knows I really like it so we stopped by and I was able to gamble for a couple of hours. I gave the casino $3 which was really good when you think about how long I was entertained. Our initial plan was to be in Red River this weekend but due to Larry getting sick we had changed our plan. When I returned Larry said he was feeling a bit better and suggested maybe we should move to Santa Fe to do a little grocery shopping and stay at the Buffalo Thunder Casino and Resort. That way in the morning we would be closer to Red River and wouldn’t have to go shopping. Also I would be able to do a little more gambling. So off to Santa Fe we went. Kind of interesting you see because we had passed through Santa Fe earlier in the day when we were on our way home.

After we finished shopping we went to Buffalo Thunder Resort and Casino where I gambled for two and a half hours and won a dollar. It was a long day with a lot of driving but we had fun. I’m glad Larry is feeling better. Life Is Good!!!!!
Posted by Ruth's Life is Good at 8:43 AM