We had another cool day.

In the morning Larry finished up the propane line project in the Minnie. He crawled under the Minnie and connected the new line to the main propane tank using a tee connector. Then he checked the connectors for leaks by using soapy water. There are a lot of pipe connections and he was surprised that none of them leaked. The last thing he did was test out the new line by setting up the propane heater, it worked perfect.


I'm very lucky to have Larry, even though he drives me crazy at time. I'm amazed how his mind works because he can figure things out and enjoys doing things with his hands. Larry has saved us a lot of money by doing projects around the house and on the vehicles. I think I'll keep him for awhile.

I wrote yesterday that we received a Wyze Scale. Below is all the measurements it captures, at the bottom it even has my heart rate. How accurate are all of these measurements, I have no idea but they are interesting. 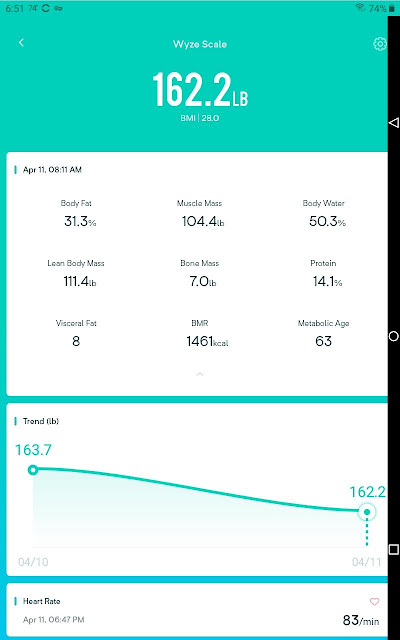 I spent 5 hours, 50 minutes and 27 seconds to finish my Solitaire World Tour of 30 Solitaire games. I got stuck on a couple of games but when I went to bed I was in 6th place in my group. I also did my daily challenges. Can you imagine spending almost 6 hours in one day playing a game on the computer?

In the evening we started watching a series on PBS called World of Fire. It is a World War II series. We watched three episodes so far and I like it. Afterwards I finished watching Hunters. If Hunters has a second season I don't think I'll be watching it because I didn't like how it ended and there was too much violence and bad language. I did 23,000 steps today.
Posted by Ruth's Life is Good at 7:19 AM