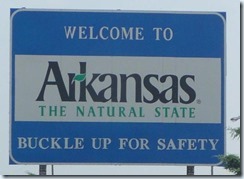 We decided to spend two nights at Lake Chicot State Park. They were predicting severe storms so we thought it would be best to stay until things had cleared up.

When we arrived at Lake Chicot State Park Larry stopped at the office to get a site. The lady in the office gave him a map and marked the sites that were already reserved. She told him that they had some rain lately and some of the sites may be muddy so he could drive around and choose which site he wanted. After driving around we found one that would work for us, back to the office we went, after paying for a couple of nights we went back to our site. We got setup  and took Flo for a walk. When we got back Flo decided she wanted to stay outside so Larry kept her company while I made dinner. 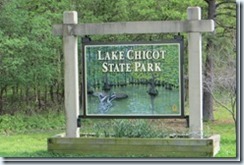 After dinner Larry and I walked around the park. It’s a big park and it took us over a half hour to walk it. As we walked we checked out what the park had to offer. We walked by the lake and checked out the docks, they had slips for your boats. We walked by the cabins, which were very nice. The park has a playground, volleyball courts, basketball court, swimming pool and pavilions. It was a very nice walk. When we got back Larry went inside and I continued waking for another half hour around our loop and the loop across the street from us. We had a very fun day. 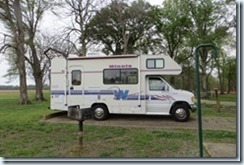 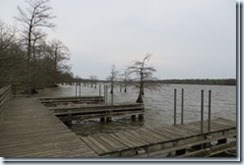 The storm came through about 10pm. it was not as severe as they had been predicting and it was gone by early morning.  We woke up to giant puddles all over the campground. Our site looked like a swamp so when Flo had to go out we had to make sure she didn’t get in the mud. The front did bring in cooler temperatures and the sun came out. We spent most of the day inside, it was too muddy to hike the Nature Trail. Flo went outside occasionally just to get out of the Minnie. When she did this I sat with her just to make sure she didn’t get in the mud. Every time she went out Larry would have to pick her up and put her outside. We have the ramp with us but we didn’t set it up considering it was going to rain. Larry and I walked around the park a couple of times, once in the morning for a mile and after dinner for a mile and a half. After the second walk I continued to walk around to get my steps in. I worked out for a little over a half hour outside. Larry started and finished a book while I started reading a book on the Kindle. 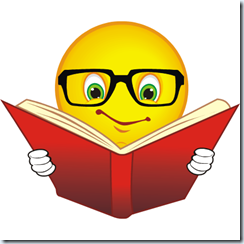 They have been having a lot of rain lately. One of the storms must have been severe considering a big tree had fallen across from us. While we were relaxing n the Minnie one of the workers from the park decided to try to cut it up. He started using a chainsaw but it got stuck in the tree so he stopped and drove his truck to their maintenance area to get a tractor. He tried moving the tree around to get it unstuck but it didn’t budge. He took an axe and cut around the chainsaw until it came loose. After getting the chainsaw unstuck he decided he couldn’t do the job so he left. The tree is still laying on the site across from us. 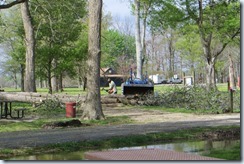 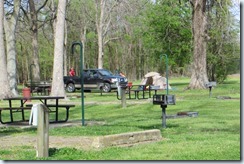 Last night we were the only ones in the loop but this afternoon a few more campers showed up (a couple in a van, a father and son with a tent and another couple with a tent). We had very relaxing day at Lake Chicot State Park.