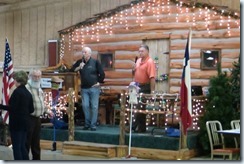 Wade Drive and Mike Bramlett calling during the Funshop

We had a very busy day of dancing with Wade Driver and Mike Bramlett. We started the day out by having a High Energy Dance from 10:00 to 11:30. We had five squares and no extra people so I couldn’t take pictures. High energy dancing is fast and fun but normally not overly complicated, we had a great time.

Then there was a two hour break for lunch. We went back to the Minnie and had tacos for lunch. Larry and I were glad there was a couple of hours break that way we could rest. 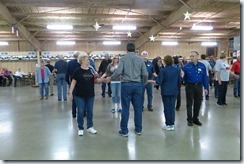 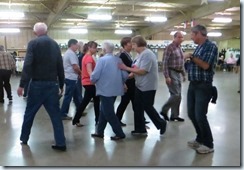 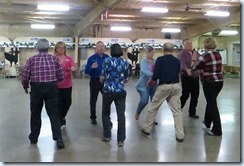 More friends enjoying the funshop with Wade and Mike calling

The afternoon session was suppose to be an hour plus funshop and a hour and half dance but ended up being a two and a half hour funshop. Mike and Wade walked us through a few moves in different positions. We had a great time dancing the different moves. Some of the positions and the moves we have done before so they were a little easier. There were enough people for six squares. Larry and I sat out a couple of tips. 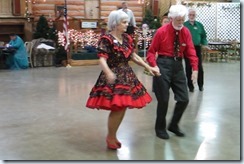 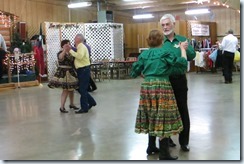 Round dancing to Mike Bramlett cuing 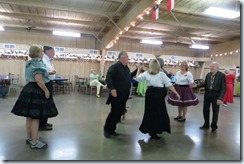 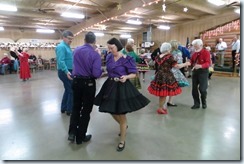 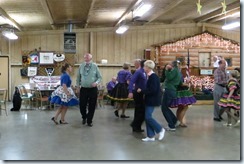 Having fun weaving the ring

In the evening the dance was from 7:00 to 9:30. We had a three hours break before the evening dance. Larry took Flo for a walk considering I was busy doing something and he got tired of me saying just a minute. While they were walking it started to rain. When they got back I made smoked pork sandwiches for dinner. By the time it was time to go to the dance the rain was coming down pretty steady but it didn’t stop people from going to the dance. There were five squares and a few extra dancers. In between some of the tips Mike Bramlett cued for people that wanted to round dance. He got about five couples up to round dance. He put on one song where a few of us ladies got up and did a line dance. The singer actually told you what to do. Larry and I sat out a couple of tips considering we were tired. We had an outstanding night of dancing.

We’re tired from all the dancing but we had an outstanding day.