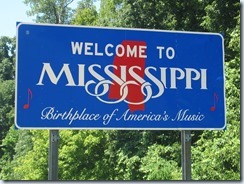 We woke up to a gorgeous morning on the lake. The wind was gone and the lake was perfectly flat. Larry got up and took Flo out for a walk, while they were gone I got up and started breakfast. When they got back Flo wanted to stay outside so Larry kept her company. While waiting Larry watched the cranes flying across the lake.

After breakfast we put things away and then drove to the capital building in downtown Jackson, Mississippi. We toured the Capitol Building and the Governor’s Mansion. Both tours had a tour guide. The Capitol Building had a beautiful gold eagle on the dome. The legislators were in the final days of the session so things were really busy. The tour guide was very good, it took about an hour and we learned about the history of Mississippi and the Capitol Building. The building has eleven different types of marble and dramatic staircases that takes you to the different floors. There are two different elevators, one was a glass elevator that still uses a actual person to operate it. It was cool to watch it going from floor to floor. We had the opportunity during the tour to go into the Senate gallery and watch the senators work. It was setup a little different than others galleries, normally whomever is talking is on the opposite side from the entrance and you can see them as you enter the room but this room was arranged so that the speaker was near the door and if you wanted to seem him you had to go around to the other side, very weird. When we came out of the gallery we heard a group of teenagers singing in the Rotunda so we stopped and listened to them. They did a super job. We had a great tour. 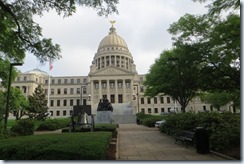 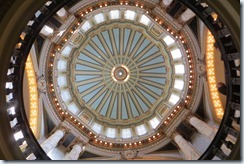 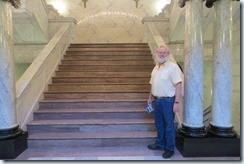 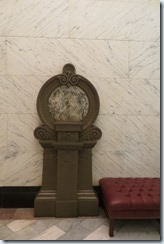 The Governor’s Mansion was an easy walk from the Capitol Building. You cannot enter the mansion through the main entrance gate you have to go through security on the side of the mansion. Everyone that walks through the gate gets a wand run over them by security to make sure you’re not carrying a weapon. The security guard then calls the house and tells them you are coming for a tour. A tour had just started so they stopped and waited for us. You couldn’t take any pictures of the inside of the mansion. The tour was about an hour long and the lady that gave the tour was great. During the tour we learned the history of the mansion and the furniture inside. The current Governor lives in the annex part of the mansion and he entertains in the historic part. When you are invited to stay with the current Governor you choose from one of the four bedrooms on the second floor of historic part of the mansion. The tour consist of walking through both levels of the historic part of the mansion, there are four rooms on each of the floors. The first floor was the entertaining rooms and the second floor was the bedrooms. It was a very interesting tour. 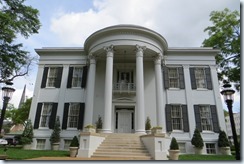 After the second tour we headed back to the Minnie, we had been gone for a couple of hours and it was starting to get warm. Once back at the Minnie I made lunch and then we headed to Lake Chicot State Park in Arkansas.

On the way back to the Great River Road Larry decided to change up the route and do something fun. He decided to take me to see the Birthplace of Kermit the Frog in Leland, Mississippi. The Birthplace of Kermit the Frog was a museum in honor of Jim Henson the Muppet King and his most famous animal pals. He was born and lived in the area for twelve years. It was a fun thing to do. 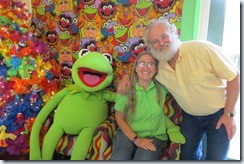 Larry and me with Kermit the Frog

After visiting the museum we continued on to Lake Chicot State Park in Arkansas. The drive was very nice. To cross the Mississippi River we traveled across a big cool bridge. While on the bridge I took a picture of a tug boat moving a barge down the river. 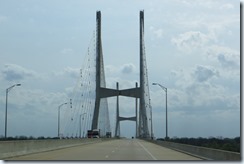 The cool bridge we took over the Mississippi River 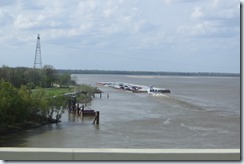 A tug boat pushing a barge down the river