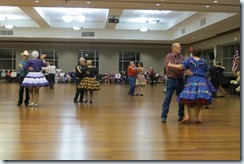 Round Dancing to Michele Vieira cuing

Today the State Square and Round Dancing Festival started with the Trails End Dance, there were nineteen squares. The callers were Matt Barnes, Brad Caldwell, KO Jeans and Wayne Weston, the cuers were Michele Vieira and Wayne Weston. The dance started out with Pre-Rounds and in between each square dance tip there was a round. After the dance they had a fund-raiser called Caller Idol to raise money for a lesson grant program sponsored by the TSCA. This year three callers participated in Caller Idol they were Brad Caldwell, KO Jeans and Wayne Weston and the MC was Matt Barnes. KO dressed up like a woman and sang a couple of songs, Wayne sang a couple of old country western songs and Brad sang a couple of songs. The last song Brad sang he sang it in six different singers voices. After each song a caller sang he was judged by a panel of three and then a bucket was passed around for the audience to vote with quarters. KO and Wayne raised $98 each and Brad raised $198. Caller Idol was very entertaining and the dance was great. 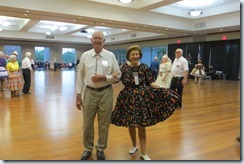 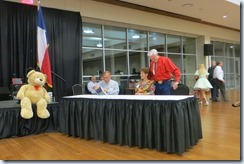 The judges for Caller Idol 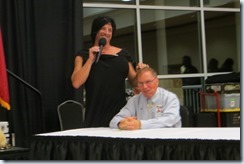 KO singing to one of the judges 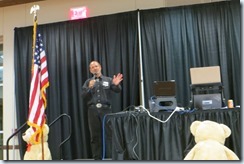 Wayne singing one of his songs 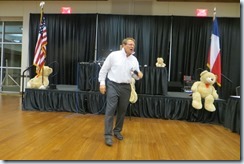 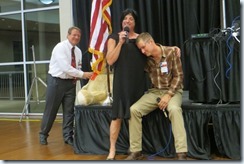