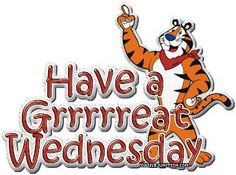 We had a great Wednesday. We started the day off by finishing up projects. Larry first of all jacked the car up and put a jack stand under it. Then he crawled under it and installed the new clips we bought a couple of weeks ago in the cover under the hood, now it doesn't flop around. The next project was for me to finish mowing the backyard. While I was doing this Larry was trimming trees. Flo stayed outside with us. After we finished we decided to take Flo swimming. We loaded her into the car and off to Nolan Creek we went. Larry parked the car in the shade and read the paper while Flo and I walked, Flo did a lot of exploring and swimming. At one point when she tried to get out of the creek she got stuck in the mud, she tried to pull herself onto the bank but couldn't so I rolled up my pants legs and got into the water and lifted her back end. Once she was on the grass she was so tired she just laid down but she was too close to the creek and she slid back in. I climbed back into the water and helped her out again. This time I made sure she was further away from the water. She was too tired to move so I walked to where Larry was parked and asked him to move the car closer because Flo wasn't going to make it back where he was. After Flo rested she got up and we walked towards the car. Before getting to the car she went for another swim. We weren't the only ones at Nolan Creek. There were a couple of families cooling off in the creek. We had a great morning.

When we got home I made tostadas for lunch and afterwords we hung around the house. I worked on my puzzle, Larry read and Flo slept.

A couple of weeks ago Louise came out so Larry could install her backup camera, Larry had taken off a the cargo cover that goes behind her second seat and forgot to put it back on. The dash cover Larry had ordered for her came in so yesterday Larry called her and told her we would be over today around 5:00 to put the dash cover and cargo cover on. About 4:00 I fed Flo and told her we would see her later then Larry and I headed to Round Rock. On the way to Louise's we stopped by Little Caesar's and picked up a pizza. When we got to her house Autumn and Louise were waiting for us. After saying our hellos we sat down and ate pizza. After dinner Larry put the dash cover on and then he put her cargo cover back on. The interesting thing about the cargo cover was that Louise didn't know it was missing for about a week. After putting the covers on Larry worked on her backyard gate. Awhile back Louise had told Larry that her dog was getting out of the yard. So Larry had given her a board and straps to hold a board in place next to the gate. He explained to her how to strap the board next to the gate. She installed the board along with another board and walkway blocks, she did a great job and Autumn has not escaped since. Today Larry fixed it where she only needed the one board and straps. After Larry finished his brother do's it was time for us to leave to go square dancing. Before leaving Larry changed shirts.