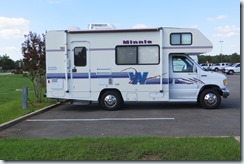 This morning I had to finish getting the Minnie ready and clean the house a little so I woke up the same time as Larry did. We had breakfast and then I finished what I needed to get done. Larry got the GPS all setup and made sure the Minnie was mechanically ready to go. While we were finishing things up our GPS took a dive off the bar and broke. Our GPS is setup on a Nexus 7 tablet that Larry loves so he jumped on the computer to order a new one only to discover it is no longer being made and a new model of it has not been released, he could get one of the models he now has but for twice what he paid for it. He decided he would wait until we got back to order a new tablet. We have a really our old tablet setup with the GPS, the screen on it has black spots but we decided if we wanted a GPS we would use it even with the spots. After Larry got the old GPS running we headed towards Paris, which was at 9:00. Paris is 241 miles from the house and It took us five and a half hours to get there but we also stopped at a Walmart and I made sandwiches for lunch. 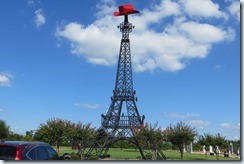 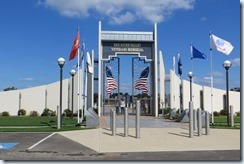 Love Civic Center is a beautiful building. On the grounds it has an Eiffel Tower and Veterans Memorial. The Red River Valley Veterans Memorial is only half done but so far it’s very nice. The RV parking has power and water and that’s all we need. The parking lot is very well lit.

By the time we arrived at Love Civic Center we had 30 minutes to spare before The Travel In Dance. The camping area is in the parking lot of the civic center so we had enough time to pay for the weekend of dancing and for the RV hook ups. The dance had 15 squares that I counted. The callers did a great job of calling the hour dance. We danced and visited with people we hadn’t seen for a year and others we hadn’t seen for awhile. We had a great time. 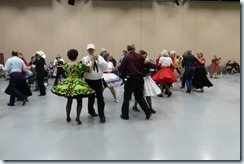 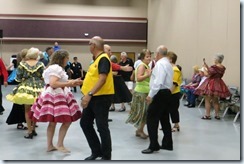 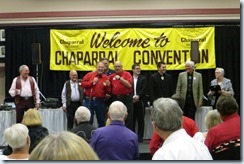 The evening dance started at 8:00 and ended at 10:30. The had an hour dance before called Caller Rama where visiting callers called a song or two. There were eight squares and it gave us an opportunity to dance to caller we never danced to. Some were very good and others were ok. One of the guest callers was Dave Vieira who we have danced to multiple times. We always have fun dancing to him. The evening dance was a Plus Dance with rounds in between square dancing tips. There were 27 squares for the dance and a lot of round dancers. There were six callers Marshall Flippo, Ken Bower, Mike Bramlett, Gary Shoemake, Hunter Keller and Justin Russell. Justin was the only caller we hadn’t danced to and he was very good. Today was a special day for Marshall Flippo, it was his 88th birthday. We sang Happy Birthday to him and they gave him a small cake with a couple number candles on it, which he had to blow out. The City of Paris gave Marshall a plaque that thanked him for his hard work at calling at this event for the last 21 years. We had a super time. We did a lot of dancing and we are tired.