This morning we took the Minnie and car dolly back to storage. Before doing this Larry emptied the tanks and I loaded Flo into the car. Once this was done off to the storage center we went. Next we went to get a couple of parts for another small project Larry is working on. While we were at The Home Depot we looked at their supply of plastic storage boxes and bought one I thought would work for my sewing stuff. Larry found one of the parts he needed but they were out of the other part. The next stop was at Don Winkler Chevrolet, the other day Larry noticed that one of the front fender inner liners was loose, one of the plastic retainers was missing. The last time we were there looking for a similar retainer the parts person said it was $7.50 per retainer. He thought the guy was crazy but today another salesman said they were $7.50, he didn't buy it. The next stop was O'Reilly Auto Parts where we paid $2.49 for a two pack. On to Ace Hardware where we bought the part we could not get at The Home Depot. Afterwards we went by The UPS Store to get our mail and a package that was waiting for us. The last stop was Walmart to pickup a couple of things we needed. When we got home I put some of my sewing stuff in the container. The container has individual plastic tub that are removable. It works perfect. Now we need another one for the rest of my stuff. Wow, what a busy morning.

In the afternoon we hung around the house. Larry and I both finished reading a book. I did some laundry. After dinner we met up with Louis and headed for our Monday night A1 lessons. We were almost to Allemande Hall when Larry got a phone call to tell him that there was no power in the hall so the lessons were cancelled, we turned around and headed home. We were disappointed considering we're almost finished with the A1 moves. After dropping Louis off we went to Freddy's for a sundae. Larry and I shared a Hawaiian Delight. Then we went home. When we walked in the door Flo had just gotten on the couch and was getting comfortable. When she saw us she got off and came to say hi to us. Afterwards we watched our Sunday shows Dancing on the Edge and Tunnel through the ROKU. We had a nice evening. 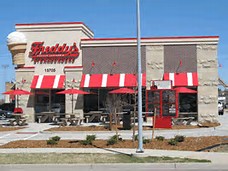