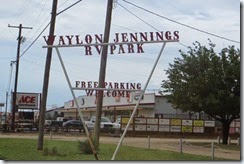 We had no intention of starting back to Texas until next week but Larry received an e-mail from his sister Louise yesterday. She had been in an accident and wrecked her car, he called her as soon as he could to find out what was going on and how she was doing. He gave her suggestions on what to do. This morning we discussed if we should continue our trip or go home. We decided to head back to Texas. Shortly afterwards Louise called and said her car was totaled and she needed to get a new one but her mechanic told her it was safe to drive her car until she got another car. When Larry told her we would be back in town tomorrow she was relieved. When we were getting ready to leave we saw eight hot air balloons flying overhead. After Larry got off the phone we were on the road heading back home. 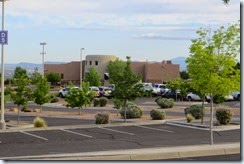 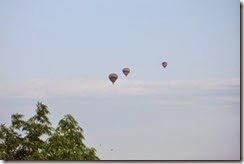 Up, Up and Away in my beautiful balloon

We drove from Albuquerque to Texico when the rain hit us, we held up in Texico to wait for the storm to go through. When the rain stopped so we continued onto Lubbock but it started to rain again so we stopped in Littlefield for the night at Waylon Jennings RV Park, which was a beautiful park. It has RV sites with power, horseshoe pits and a great Lamb County Veterans Memorial. The park is free for the first four days and after that it cost $20 but if you want to give a donation that was fine. The park was a great place to be held up at until the rain goes away. 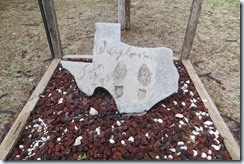 The entrance to Lamb County Veterans Memorial
Posted by Ruth's Life is Good at 10:48 PM