5-17 Fixing Toilet in the Minnie 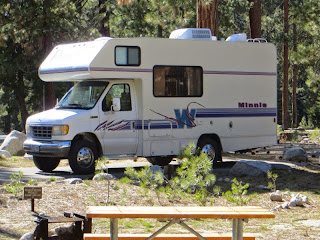 The next project Larry did on the Minnie was work on the toilet. During our trip Larry noticed there was water behind the toilet, he checked it out and found the leak. Then he tightened up the plumbing and stopped the leak but he knew this was only a temporary fix. When he had ordered parts for the the tune up he also had ordered parts for the toilet. After tuning up the Minnie Larry started working on the toilet, he was surprised how easy it was to get the toilet out. Once he got it out he took it apart, which took awhile to do. When the toilet was put together in the factory they had sealed the top and bottom together with a heavy duty sealant. When he finally got it apart he cleaned off all the sealant with Goo Gone, alcohol, Simple Green and Lacquer Thinner (this worked the best). After cleaning up the toilet he started reassembling the toilet parts, he replaced the flapper and water valve. Before sealing it up again he made sure everything worked. It worked better than it had in a long time. He sealed with DAP Kwik Seal and then he put the screws back in replacing rusted ones with new stainless steel screws. When the toilet was reassembled he reinstalled it in the Minnie. Larry did another super job. Way to go honey.