4-4 Visiting with Andrea and Mike 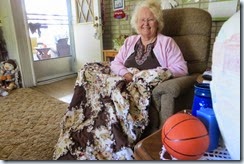 Shirley modeling a quilt made by Louise her daughter

The other day when we were in town Shirley bought cooler pads for her coolers. Ray came over last night and saw the cooler pads and apparently decided this was a hint to get her coolers ready for summer. This morning before it got hot he came over to work on the coolers. He got one cooler done and has to buy a new pump to get the other one ready. While Ray worked on the coolers we had lunch. Shirley and Larry had ham hock and beans and I had a ham sandwich. I gave Flo a ham bone and when she got tried of eating the bone Pooh Bear finished it up. Shirley doesn’t give Pooh Bear bones so he was thrilled to get his first bone. After lunch Ray was finished so we visited with him before leaving to go to my sister’s house. 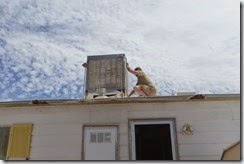 Ray working on his mom’s coolers 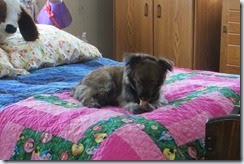 This afternoon Larry and I went over to my sister Andrea’s house. We visited with my sister Andrea, her husband Mike, son Joey and her daughter Ashley, my sister Alexis and two other nieces Elizabeth and Katherine were also there. We went to lunch and enjoyed visiting. Ashley and Elizabeth decided they wanted to go swimming, Andrea asked Ashley to clean the pool. 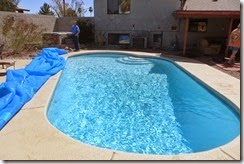 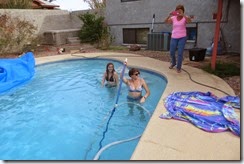 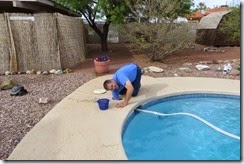 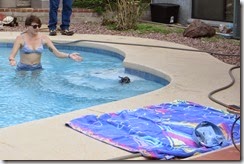 Ashley playing with her eight week old pup in the pool