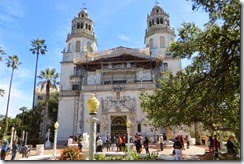 We had another gorgeous day in sunny California. It started out a little chilly but ended up warming up. Larry and I toured Hearst Castle. We were there about 25 years ago and took the Grand Rooms tour so today we took the Upstairs Room tour. Before going on the tour we watched a movie about W.R. Hearst and walked through the exhibit rooms. The tour was 40 minutes long, we climbed spiral staircases to the second and third floors. The living quarters of the castle were magnificent with grand décor from all over the world. After the tour we walked around the grounds to look at the Neptune pool, the three guest cottages, tennis courts and the indoor Roman pool. The castle’s roof was being replace so there were scaffolding around the castle. The Neptune pool was being reworked so it didn’t have any water in it but it was still impressive. We had a super tour. 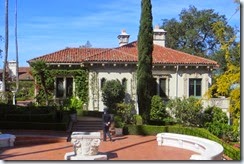 One of the Cottages 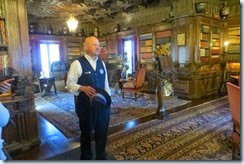 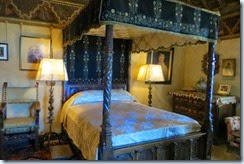 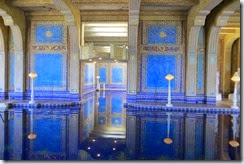 After our tour we drove down the coast to check out the elephant seals on the beach. The beach had hundreds and hundreds of seals on it. We watched the seals play, scooting on the beach and crawling out of the ocean. They are amazing creatures, they aren’t the fastest moving or graceful creatures but they get where they need to be. What a wonderful day we had. 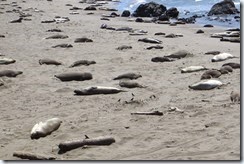 Elephant Seals on the beach 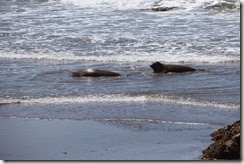 Two seals playing in the water
Posted by Ruth's Life is Good at 5:39 PM