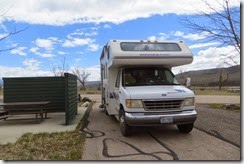 We left Coral Pink Dunes and headed towards Otter Creek but did a side trip to Bryce Canyon National Park. On the way to Bryce we drove through a couple of cool tunnels and saw beautiful red rock formations. We have been to Bryce a couple of other times but this time the shuttles were running caused by the increase of visitors to the park. Larry parked the Minnie and off to catch the shuttle we went, we thought the shuttle was going all the way to the top of the canyon, we were disappointed to find out it only went to Sunrise Overview. There was another shuttle that was called the Sunrise Shuttle that went all the way to the top and took three hours and the next shuttle was at 1:30 and it was a couple of hours away. So we rode the shuttle from the visitor center to Sunrise Overview and back then we had lunch. We decided that we had been here a couple of times before that we weren’t going to take the Sunrise Shuttle so we said good-bye to Bryce Canyon National Park. 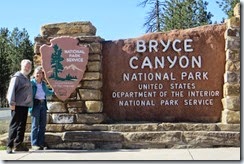 Larry and I at the welcome sign to Bryce Canyon National Park
On the way to our next destination, which was Otter Creek State Park we went back through the two tunnels, saw the red rock formations and drove through a pretty canyon. Otter Creek State Park is a nice park with site on Otter Creek Reservoir and the other sites have a view of the reservoir. It is known for fishing, boating, camping, water skiing and bird watching. While there we walked around the park and let Flo put her feet in the lake, I didn’t want her to go swimming because it was too cold for me to sit outside with her while she dried. 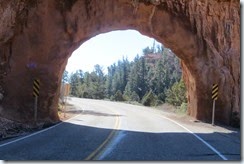 Driving through a tunnel 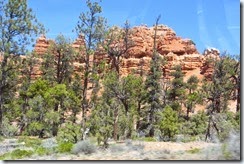 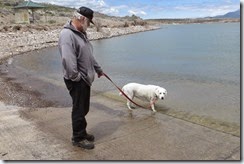 Flo getting her feet wet at Otter Creek