Friday 10-26 Giving the Minnie a Bath

We woke up to a foggy morning but by midday the sun was shining. The temperature got up to 74 degrees, a very pleasant day.

Being on the road for two months and driving in some rain left the Minnie filthy. The weather was perfect so we washed the Minnie. Larry started out by climbing on the roof and scrubbing it down. While Larry was getting ready to wash the rest a gentleman drove up to visit. We have never seen the gentleman before but it's not the first time someone has stopped by to visit. After Larry washed the Minnie I dried it. It took us all morning.

After lunch Larry washed the motorcycle, it was also dirty from being hauled around for two months. When he was done we loaded the motorcycle carrier on the truck and took it to storage. When we got home we took the motorcycle for about a 15 mile ride. We drove by the spillway where the lake's gate is open. Then we drove around a bit and came back to the house. We had a great ride.

During our trip when we visited the National Train Museum we bought a cool 1000 pieces jigsaw puzzle. This afternoon I started assembling it. It's going to be challenging because of its shape. The shape is a train and the smoke are horses. 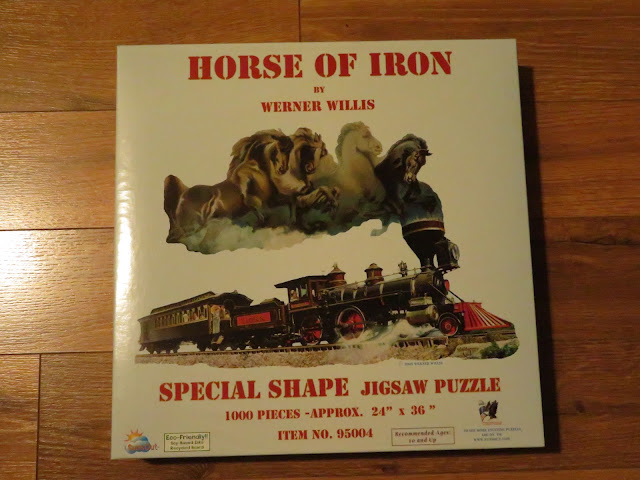 For dinner I made more empanadas. Then we watched some YouTube videos. We started watching a couple of PBS series. The first one was Woman in White, it is currently being shown weekly on PBS but all the episodes for this season are available via PBS for streaming. The second series was called Jackie Drake Mysteries, its about a couple of female private detectives. We watched one episode together. After Larry went to bed I watched three more episodes. We had a great day.