Have you ever been to soapbox car race? First of all I'll explain what a soapbox car is. It is a car that is unpowered, relying totally on gravity to move. The soapbox car is homemade. The first race in the United States was in 1934, where 362 kids showed up with cars made out of orange crates, sheet tin, wagon and baby buggy wheels. Now days they use standardized wheels with ball bearings and start on a hill and can get speed up to 35 mph. The races are more organized.

Larry was reading the paper the other day and came across an advertisement about Marble Falls having an Adult Soapbox Derby on Father's Day weekend. He thought it would be fun to attend so this morning we decided to go. This was Marble Falls 8th year to hold the event. Usually soapbox cars are driven by kids but today they were driven by adults. We arrived a little early so we walked around the area and looked at some of the soapbox cars. There were vendors selling knick knacks and food. There were bleachers for spectators to watch the races. We watched the races for about an hour. There was a derby hat contest at 2:00 but we left at 1:00, it was getting hot. We watched the two oldest racers race, one racer was 65 and the other one was 75. This proves that you're never too old to have fun. We had a great time watching the races.


On the way home we stopped in Burnett to have lunch at Storms, which is a hamburger place. We have never been there before but our friends (Dalbert, LuAnn, Connie and Harold) had and they said it was good food. It was good food and was very reasonable priced. We shared a hamburger and an order of fries and for dessert we had a cup of chocolate and vanilla swirl soft serve ice cream. 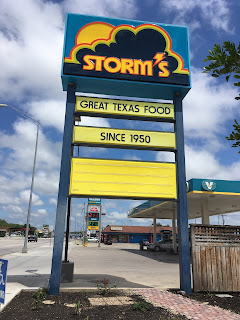 When we got home I worked out for a half hour on my Wii Fit, then we watched our YouTube videos. In the evening we watched one of our dvds off Amazon called Martian. It was a good movie. Last year we watched a series called The Tunnel on PBS and Larry received an e-mail telling him that the second season started and it was available on our Roku. After watching the movie we watched The Tunnel. We had a very fun day.
Posted by Ruth's Life is Good at 6:59 AM