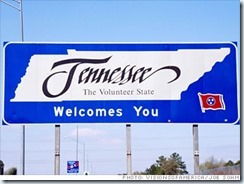 Last night around midnight the wind came up and it rained hard. The wind was so strong that it rocked the Minnie and rattled the step. By morning the rain had stopped and the wind was down but the rain was suppose to be back at noon, we decided to leave and go to Memphis, Tennessee. Larry and I ate breakfast and walked over to the bathhouse to take a shower. Afterwards we got the Minnie ready to leave.

Memphis was only 35 miles away. Larry had read that you can park at the Bass Pro Shops and take a shuttle to town. Bass Pro Shops was easy to find considering it was a huge pyramid shaped building close to downtown. Once we parked the Minnie Larry checked on his phone how far it was to get to Beale Street and found it was only 1.3 miles away, we decided to walk. It was starting to sprinkle and the wind was coming up so we took the umbrella with us. We were glad we did considering it started to rain harder, fortunately it didn’t last long.

The walk to Beale Street was along a sidewalk and trail that went next to the Mississippi River. Near the end of the walk along the river there is a area called Beale Landing which is a combination of a park, splash pad, tourist information and a dock to catch the riverboat ride. There is a huge ramp system that takes you to the dock. There was a beautiful building that has a café and gift shop. We walked on a grassy hill that is the roof of the café and gift shop and then we walked back to Beale Street. Beale Street is where all the nightclubs are located. We walked around Memphis for a couple of hours. There is a wonderful statue that pays tribute to W.C. Hardy, who is the Father of the Blues and a beautiful city park has a statue to honor Thomas A. Edison. The city has spent a lot of money trying to keep Memphis alive. We stopped at Lenny’s Sub Shop for lunch. 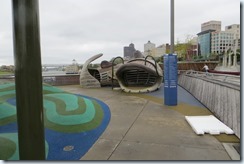 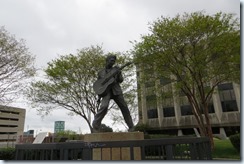 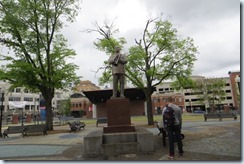 A statue of W.C. Hardy the Father of the Blues

Larry called Memphis Riverboats to see if their river boat cruise was going out and what time we should be at the dock to catch it. The lady told him they were going and we should be there between 1:30 and 1:45, the boat leaves at 2:30. The ride was for 90 minutes and cost $20.00 per person but if you’re 60 you save $2.00. Around 12:45 the rain came back and it started to rain hard and the wind came up. We weren’t sure if we were going on the cruise or not. It slowed down at 1:15 so we walked the mile or so to catch the boat. By the time we got to the gift shop to buy our tickets the rain had stopped and the sun came out.

When it was time to load up we had to walk down the long curvy ramp to the boat dock. The boat has three levels. The first level is enclosed and they serve meals here when you take the dinner cruise. The second level is also enclosed and you can buy snacks. I bought a couple of hot dogs and a bottle of water. During our ride we met a very nice couple from New Zealand.  The tour guide talked for the entire trip, he told about the history of Memphis and the Mississippi River, he was very good. We were glad we had worn a jacket considering the wind came up and it was cold. We had a great time.

The riverboat we took down the Mississippi River 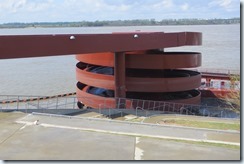 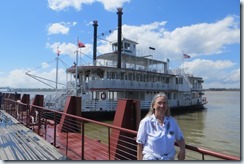 After our riverboat ride we walked through Bass Pro Shops. Originally the city built the pyramid building for a pro basketball team and after a few years the team decided they didn’t like the building so the city built a new venue for them. The university then used it for basketball for a couple of years and decided it wasn’t working out for them. It sat empty until Bass Pro Shops came to town and took it over. It is a huge building. Bass Pro Shops occupies part of it and the rest is occupied by a lodge. They did a super job utilizing the space. They have a lot of displays of wildlife and fish. While walking around we saw a lady scuba diver cleaning a big fish tank. When we were walking through the fudge store we stopped and bought a couple of pieces of fudge. 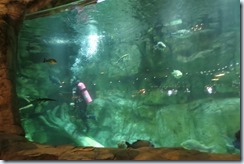 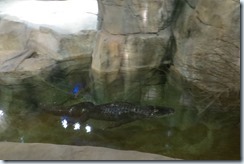 After dinner we left Bass Pro Shops and drove 30 miles down the road to a Walmart where we spent the night. While there we did a little grocery shopping. We had a very fun day even though I walked Larry to death.  We walked over 8 miles.