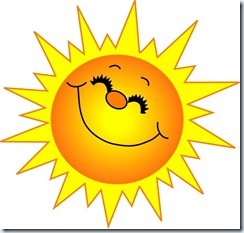 We woke up to sunshine and wind. The wind kept the temperature down and it was a beautiful day.

Today we left Wisconsin and went to Minnesota. We didn’t stay long in Wisconsin, lots of things are closed on Mondays and some things don’t open until May or June.

This morning I didn’t want to get out of bed, finally crawled out about 8:15. I made breakfast and then I put things away and got the Minnie ready to go. Before leaving we walked over to Walmart and then to Dollar Tree, we finally were ready to get on the road at 9:45 am, very late for us.

The first stop in Minnesota was at the visitor center to get a map and other information about Minnesota. We went back to the Minnie so we could figure out where to go and while we were sitting there we saw a tugboat heading to the lock. The lock was not far away so we started up the Minnie and headed that direction. We weren’t sure if we would be there in time. It wasn’t too far but the tugboat was going fast since it didn’t have a load. We made it there just in time. It didn’t take long for the tugboat get through the lock but it was fun watching it. The lock and dam at this location was #7. There are only six more locks on the Mississippi. 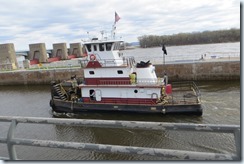 The tugboat going through Lock and Dam #7

The next stop was in Wabasha, Minnesota to visit the National Eagle Center. We got there at noon and found a place to park the Minnie. They have a 72 hour parking area under a bridge, it was perfect for us. Once we parked Larry and I walked over to the National Eagle Center. There were a lot of kids there, I guess they were off because of Easter. Larry asked the ladies that were working the desk when their next presentation was. They said at 1:00 so we went back to the Minnie and had lunch. When we got back one of the ladies asked where we ate. Larry said at Ruth’s Kitchen. She looked confused and we explained we had a RV and we went back there. She understood now so she laughed. We walked around and looked at the exhibits and read about eagles. There was an enclosed area where they had four eagles (a Golden Eagle and three Bald Eagles) and each eagle was named. When it was time for the presentation we headed towards the room. By the time it began the room was almost full. The lady that did the presentation did a very good job. During one part of the presentation she had a boy volunteer to go up in front and wear an eagle costume. As she explained the parts of the eagle body she added the parts to the volunteer (she added eyes, beak and feet). She also had the kids go to the front to see what type of bird they were by their wing span. She had a board with different colors on it and each child spread their arms. If you were yellow you were a duck, if you were gray you were a loon, if you were blue you were a turkey and if you filled the board you were an eagle. The kids had a great time doing this. A handler came in with one of the bald eagles named Angel to see if she would eat a rat she had for her, guess she must have been nervous. After the presentation we all went to the viewing area and looked at the eagles. As we walked around looking at the displays we saw some gorgeous carvings done of animals in the wild by Jim Ramsdell. We had a super time at the National Eagle Center. 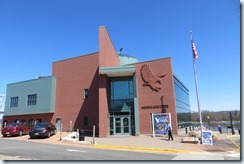 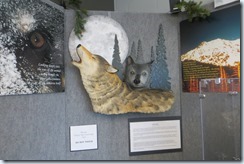 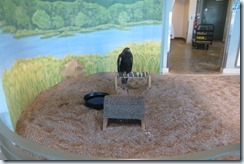 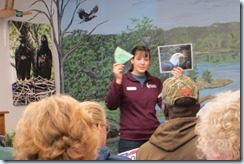 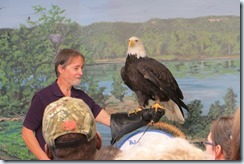 When we got back we took Flo for a walk and then decided where to go next. It was a little after 2:00 and Larry wanted to have the tire rotated and he found a Discount Tire in Woodbury so off we went. They told us that they would be finished with rotating the tires at 5:30 and we could visit some of the shops in the area while we waited but we just hung out in the Minnie and kept Flo company. They had us in and out by 5:30. After leaving Discount Tire we walked over to Culver’s to have dinner and then we drove over to Cabela’s. Most Cabela’s have RV parking and allow you to stay overnight.

Upon arriving we took Flo for a walk and then we walked through Cabela’s. It was a lot smaller than the one in Kyle, Texas but it still had great wildlife displays. When we got back to Flo I continued walking for another half hour to get my steps in. Larry spent the evening trying to figure out what to do in Minnesota. He is finding that a lot of things don’t open until May, even most of the campgrounds are closed. I guess we’re a bit early to be this far north. We had a great day.