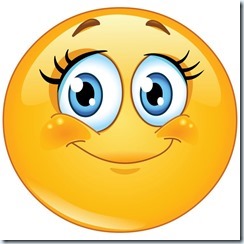 Before leaving Dubuque we decided to do a little site seeing in downtown. Last night Larry and I walked around the river area so this morning we walked around the downtown. There were maps throughout the downtown area and on the riverwalk that shows different points of interest for tourists. Well, Larry decided on four of them. I was game. The first site we visited was St. Luke’s Methodist Church, it is known for their Tiffany windows. We went to the office of the church to see if we could visit their church. The lady said we were welcome and if we wanted we could also come back for Good Friday services at 12:00. We had finished walking through the church and were ready to leave when a gentleman met us. He gave us a quick tour of the church. He talked about the history of the church. He explained that all the windows but one were Tiffany windows. In 1896 when the church was being built the church members saw the Tiffany windows and decided they wanted to put them in their church. They also have a gorgeous organ with 2,200 pipes which they restored in 1992. The ceiling was made with beautiful wood planks. St. Luke’s Methodist Church was magnificent. 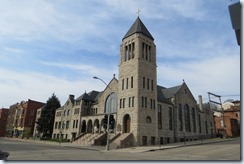 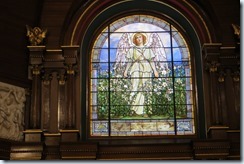 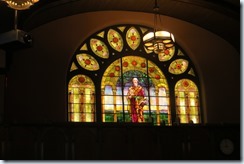 The second site we stopped at was the Carnegie-Stout Library. Across the street from the library we saw this huge old red brick home, it took up about half a city block. When we walked in the library the librarian greeted us. She told us we could take the elevator to the third floor to get a nice view of the library. We walked around the library and admired how big it was. On the way out we stopped at the desk and Larry asked the librarian about the library. The section that is being used as the library was the original Carnegie Library, they have done some restoration work over the years but have kept it as original as possible.  She also explained that the huge house across the street had been built by the Stout family who had also donated to the construction of the the library, they were wealthy owners of a lumber construction business. Each room in the house had a lot of wood and the new owner is resorting the house. The librarian was very helpful. 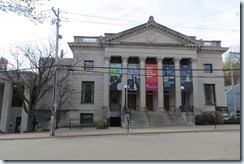 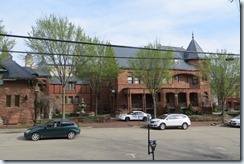 The old home being restored

As we continued our site seeing Larry told me if I wanted to get a good view of Dubuque I could climb this really steep staircase. I didn’t show much interest in climbing the stairs so we continued down the street. Our third site was Fenelon Place Elevator Co. which was a elevator car that took us up the same steep hill as the steps. Years ago this elevator was built by a banker as his private elevator, today it is a tourist attraction that is used to move people up and down the hill. It wasn’t like a normal elevator, you sat on a step in a car and it runs on a cable that a gentleman operates from the top of the hill. It cost $3.00 roundtrip for an adult. It was well worth it consider it was fun to ride. 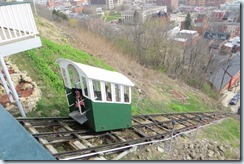 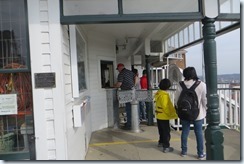 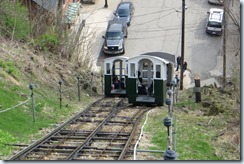 The two cars passing each other on the rail

The last site we saw was Saint Raphael Cathedral. We have been to other cathedrals but this was the first one we have been to that was locked. It did have a great sculpture in the garden, the sculpture had a priest with a miner on one side, a river captain on another side and a farmer and his wife on the last side. 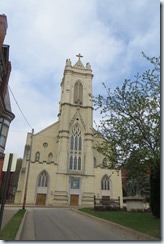 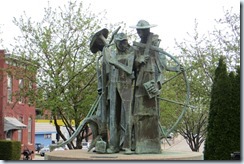 The sculpture in the garden

We walked around downtown Dubuque for almost two hours. We had a great time seeing the sites and looking at the downtown. When we got back to the Minnie we got ready to move on to our next adventure, which was Pikes Peak State Park.